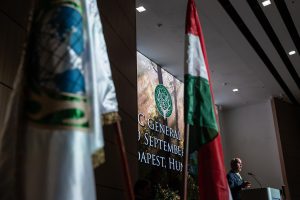 On 26 September, 2021 the 67th General Assembly of the CIC officially kicked off in Budapest, Hungary. The event, which is being held under the theme of “One with Nature – Rural Voices, Global Responsibilities,” will take a look at the importance of our rural areas, and the ways in which the CIC and the wider sustainable use community can build alliances in this field.

The Hungarian Defense Forces Central Military Band were in attendance for the start of the Opening Ceremony, and played the CIC Hymn and the Hungarian national anthem as part of the CIC’s Flag Ceremony. The CIC’s delegation of Hungarian Hussars (light cavalry) were also on stage as part of the official handling of the flags. 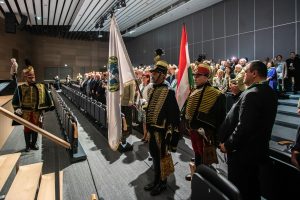 President of the CIC, George Aman, then gave an opening speech in which he thanked Dr. Zsolt Semjén (Deputy Prime Minister of Hungary) and Kovács Zoltán (Government Commissioner of OWN) for making the event happen despite the circumstances of the global pandemic. He went on to thank everyone in attendance and wished them all a pleasant time at the conference. 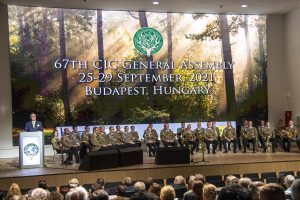 Dr. Semjén then took the stage to talk about the changes we have seen in attitudes towards hunting compared to Hungary’s first World Expo in 1971, and our need to take a proactive approach in preserving hunting culture. He also highlighted Hungary’s pyramid approach to preserving hunting, which consists of large international events (like One with Nature) at the top, regional exhibitions in the middle and events for local communities at the base.

He concluded by discussing Hungary’s relationship with the CIC, making particular mention of the CIC’s 1 Euro per Hunter initiative, which Hungary joined and has been fulfilling payments for over the last three years – he also confirmed the country’s commitment to the initiative going forward. Finally, he thanked the CIC for its preparatory work for the exhibition, as well as the hunting events that Hungary has hosted over the years.

CIC Director General, Tamás Marghescu, then awarded the Deputy Prime Minister with the first ever CIC Order of Merit in recognition of his invaluable services to global wildlife conservation. 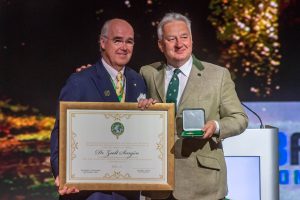 Freiherr Philipp von und zu Guttenberg, renowned farmer and forester from Austria, then gave his opening remarks, in which he emphasised our need to create alliances with stakeholders in rural areas.

In order to preserve our rural areas, and in turn preserve hunting for future generations, he put forward a threefold approach; reunite rural forces, clear out our own closet, and come up with a common narrative suited to today’s world.

To close the ceremony, Head of the French Delegation, Emmanuel Michau, presented an award made in honour of Willy Schraen, President of the French National Hunters Federation (FNC). The award was given in recognition of a book authored by Willy Schraen on hunting, rurality and rural areas.

As Willy Schraen was unable to attend the event, the award was accepted on his behalf by Vice- President of FNC, Alain Durand. He spoke on behalf of Willy Schraen, stating that the book was written to show what hunting and rurality meant to the author, and that the objective of the book was to protect rurality. Giving France and FNC as an example, he underlined how hunters cannot continue as they currently are without placing rurality as their central issue of concern.

To conclude the Opening Ceremony, the Hungarian Defense Forces Central Military Band played a closing march for the attendees.

We will be covering all of the events and sessions of the 67th General Assembly in the coming days, so stay tuned for more information as we progress through the event.

Videos of all the sessions, including the Opening Ceremony, will be posted on our website soon for those looking for a more detailed look at the events.