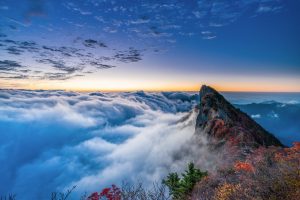 The newly released report by IPCC (Intergovernmental Panel on Climate Change), a UN body for assessing climate change science, has stated that indigenous and local knowledge will play a key role in creating solutions designed to tackle climate change.

The Summary for Policymakers of the IPCC Working Group II report – Climate Change 2022: Impacts, Adaptation and Vulnerability – was approved by 195 member governments of the IPCC on 27 February, 2022.

The report states that the world will be facing severe climate hazards over the next decade, and discusses the need to intervene now to mitigate increasing climate risks.

At the same time, supporting ecosystems will have the added benefit of providing “life-critical” services for people, such as food and water.

When looking to tackle climate and sustainable development issues, it is stated that combining “scientific and technological know-how as well as Indigenous and local knowledge” will be the way to create more effective solutions.

We have seen past examples where this combination of indigenous knowledge and modern approaches has led to results for both conservation and human livelihoods.

For example, this project launched in 2018 combined the tracking skills of the indigenous San people with camera traps to assess the long-term effectiveness of fencing as a conservation tool in the Khutse Game Reserve and the southern part of the Central Kalahari Game Reserve in Botswana.

It should be noted that the San people also play an integral role in supporting the Namibian Nyae Nyae Conservancy, which won the CIC Edmond Blanc Prize in 2019. The prize is awarded to outstanding efforts in wildlife conservation and game management that are based on the principles of sustainable wildlife use. During the acceptance speech for the award, the professional hunter at the conservancy made particular note of the knowledge that the San people are able to provide in terms of tracking and how to coexist with nature.

It is only by carrying out projects like the one mentioned above – those which look to support ecosystems and human well-being through a One Health approach – that we can build a brighter and more connected future.

The CIC congratulates IPCC and its member governments for approving and taking on board the contents of this new report.

Many scientific bodies and conventions are now acknowledging the need to recognise the rights of indigenous and local peoples, as well as their associated knowledge. With the 195 member governments having approved this report, we can hope to see new and innovative solutions to the world’s climate and sustainable development issues in the near future.