Unless indigenous peoples and local communities are recognised and supported, conservation and CITES itself are set up to fail.

Indigenous peoples and local communities (IP&LCs) are expected to be a prominent topic at CITES CoP19 which kicked off at the start of the week, with much of the discussions having already centred around recognition of IP&LC rights and traditions as part of CITES decision-making processes.

IP&LCs have always played a key role in conservation. Their knowledge on biodiversity, sustainable use and wildlife management is something that many policymakers have started to acknowledge in recent years, and integrating IP&LCs into environmental processes and conventions will be critical if we are to build towards a more sustainable future.

Day two of CoP19 was a particularly action packed day with regards to this topic, with both a side-event and a press conference dedicated to informing the public and CITES itself on IP&LC issues.

The take home messages from the events were clear. While CITES was broadly praised for their efforts to highlight the importance of IP&LCs up until now, there was a distinct feeling that more needs to be done.

Understanding the role of IP&LCs in supporting conservation. Recognising the livelihood implications of CITES decisions. A need for a better mechanism to encourage dialogue and action between CITES and relevant stakeholders. These were key points that were brought up on several occasions throughout the day’s proceedings.

The remaining days at CoP19 are set to decide how and when such changes can be implemented. The IUCN Sustainable Use and Livelihoods Specialist Group (SULi) has already hosted a side-event on how to practically implement solutions to some of the issues discussed throughout the day.

A full summary of the side-event and press conference can be seen below.

“QUO VADIS CITES? Is CITES at a Crossroads?”

Setting the scene for a day of deliberations on IP&LCs was an open press conference held under the theme, “QUO VADIS CITES? Is CITES at a crossroads?”

The press conference was organised to shed some light on the potential impact that CITES CoP19 decisions may have, while giving a platform to speakers to share their thoughts on the most pressing issues affecting sustainable livelihoods.

The event was moderated by Bupe Banda (CLN), who set the tone by first reminding the audience that a number of UN declarations recognise the importance of rural communities and that it is time for CITES to recognise the same.

Hon. Nqobizitha Mangaliso Ndlovu (Minister of Environment, Climate, Tourism and Hospitality Industry. Zimbabwe) opened the discussion by reflecting on the role that legal trade plays in stimulating local economies and livelihoods. With this in mind, it was stated that the biggest issues – such as organised crime – can never be solved without having IP&LCs represented in international conventions.

Making a similar point was Lourence Mogakane (Chairperson for the People and Parks National Community Representatives forum. South Africa) who argued that the most effective and fruitful systems are the ones where the rural people and local communities have a say in decision-making, due to the direct link between CITES and livelihoods.

Having the right national framework in place to empower IP&LCs in parallel with international cooperation was also mentioned as a matter of high importance. In this regard, Dr Rodgers Lubilo (CLN Zambia) highlighted how IP&LCs should not only be participants but also reliable and active partners to the governments.

From an IP&LC perspective, sovereignty and the right to self-govern were among the key takeaways from the press conference. Jessica Fort (Wildlife Biologist at Navajo Nation Department of Fish and Wildlife) spoke on this point while representing the Navajo Nation, the largest native American tribe in the US.

It was noted that native people have a deep connection and relationship to their lands and how it is of utmost importance to have this approach valued. Furthermore, with tribal territories covering huge expanses of critical wildlife habitat across the country, it was argued they have equally important wildlife management responsibilities as their state and federal counterparts.

Emilio Rangel (Chair of the Mexico Council) reflected on the positive role of sustainable use in supporting communities. Mexico was given as a case study, where hunts for local big game species is the most important tool for species and habitat conservation, with significant improvements to habitat qualities and species numbers seen since 1995 (Desert bighorn sheep grew from 5,000 in the 90s to 16,000 today).

Closing the press conference was Maxi Pia Louis (Director of the Namibian Association of CBNRM Support Organisations), who emphasised how bringing IP&LCs to the table will be critical if we are to implement the Sustainable Development Goals (SGDs), address human-wildlife conflict and eliminate poaching.

Going forward, CITES was encouraged to continue discussing the issue of IP&LCs, and a reminder was issued to participants that conservation will never work unless rural communities are properly recognised.

“The Impact of CITES Decision-Making on Livelihoods and the Role of IP&LCs in the Convention.” 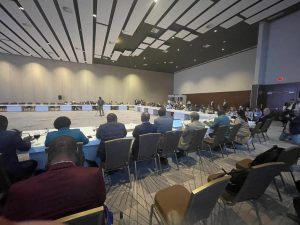 The side event was hosted by the Governments of Zimbabwe, Botswana and the Community Leaders Network (CLN).

As suggested by the title, it looked to investigate how human livelihoods are impacted by the decisions made by CITES, as well as the current and possible future role of IP&LCs in the convention.

As part of the proceedings, two CITES CoP19 Working Documents of particular interest to the topic area were presented and explored together with participants.

The establishment of a Rural Communities committee was the first to be discussed, with Patience Gandiwa (Vice Chair of CITES CoP19) introducing the relevant CoP19 Working Document 15 – Participatory Mechanisms For Rural Communities In CITES.

The document is a follow up on previous attempts to establish such a committee; it was noted that CITES currently has no specific mechanism that will amplify the community voices in decision-making processes.

Much of the deliberations at the side-event also centred around the holistic relationship between IP&LCs and CITES.

Talking about the current work being done to recognise IP&LCs was Hon. Nqobizitha Mangaliso Ndlovu (Minister of Environment, Climate, Tourism and Hospitality Industry. Zimbabwe), who expressed his gratitude towards the Parties for their fight for IP&LC inclusion.

There was, however, discussion on a need for further action going forward. Dr Rodgers Lubilo (CLN Zambia) stated that governments already acknowledge the importance of rural communities in species and habitat conservation, and that it is time for CITES to recognise this too. It was suggested that not doing so would result in a failure for species and habitat conservation, as well as CITES as an international convention.

Hon. Rodney Sikumba (Minister of Tourism. Zambia) later underlined how local community engagement with CITES should ultimately translate into national policy; the Zambian Government taking steps to devolve decision-making to local communities through the approval of a national Community Based Natural Resource Management policy was given as an example of this in practice.

Numerous case studies of communities benefiting from wildlife were given throughout the event, with Ditiro Mmereki Ngamiland (Council of NGOS, a member of the CLN) in particular speaking about the socio-economic ties between livelihoods and the sustainable use of natural resources.

Providing a European perspective on IP&LCs was Jorge Rodriguez Romero from the European Commission (Head of United of the Global Environmental Cooperation and Multilateralism, DG Environment).

It was stated that the EU continues to be interested and active in finding the best way to engage rural communities; he further emphasised the responsibility of the Parties to integrate rural communities, while highlighting the need to respect the integrity of decision-making in CITES.

The interests of rural communities in the Latin Americas was also brought to the table by Hesiquio Benitez (Head of the Mexican Delegation), who spoke about the importance of analysing value chains associated with wildlife, while making sure that the rural people are getting the true benefits from species conservation.

It was added that in order for such analyses to occur, rural communities need to be included in the dialogue, especially for species listed on Appendix I. Overall, it was suggested that the CITES criteria should be respected, given how Appendix II – if implemented correctly – is a great tool for conservation.

The side-event was concluded by Marius Msusha (Director of Parks of Tanzania) who summarised the points discussed.

As a final note, he expressed his hope that this CoP will make significant steps forward for IP&LC representation in CITES.