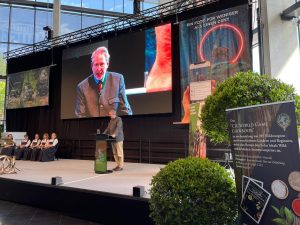 The Jagd und Hund Fair 2022 kicked off today in Dortmund, Germany. The fair is the largest hunting exhibition in Europe, and this year’s iteration marks the 40-year anniversary of this historic event.

As part of the festivities, CIC President Dr. Philipp Harmer gave a welcome speech for participants at the fair, where he stressed how the world around hunting has changed since Jagd und Hund first opened its doors 40 years ago.

In this regard, it was emphasised that hunters need to adapt going forwards. Effectively communicating with non-hunting audiences, particularly about the services that hunting renders to society, was put forward as a vital area of focus for hunters and supporters of sustainable use.

The CIC German Delegation also hosted an event in the framework of the opening day, in the form of a session titled “The Draft of a New Hunting Law in Brandenburg – Sustainable Habitat and Game Management.”

The session explored recent events in Brandenburg, in which there were efforts to introduce a new legislation that would have been detrimental to hunting values and ethics.

While this piece of legislation was ultimately not passed, it was noted that the course of events may have set a precedent for similar incidents in the future, creating a potential area of concern for hunters and the work they carry out in supporting wildlife conservation.

In addition, we are proud to announce that the CIC World Game Cookbook will be widely promoted as part of this year’s Jagd und Hund.

A double page spread on the cookbook is printed in the Visitor’s Guide, in addition to being advertised on Infoscreens around the fair. Furthermore, recipes from the cookbook will be cooked live on the cooking stage by Yvonne Scharl-Blöcker.

If you are in Dortmund and will be attending the fair in the coming days, the cookbook will be available for order at the Paul Parey Zeitschriftenverlag GmbH stand (4.A32). Copies of the book can also be viewed at the booths operated by Wild & Hund, Juwelier Halder and Mark Dedekind (South African outfitter).