Philipp Harmer Succeeds George Aman as President of the CIC: “Hunting Renders a Service to Nature and Society” 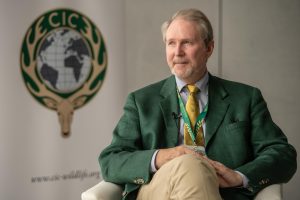 Philipp Harmer Succeeds George Aman as President of the CIC

“Hunting Renders a Service to Nature and Society”

The International Council for Game and Wildlife Conservation (CIC) bids a warm farewell to its outgoing President, George Aman from Switzerland, who has chosen to step down from the position after a successful 5-year tenure. In turn, the CIC welcomes its unanimously elected new President, Philipp Harmer from Austria.

“Building partnerships and alliances with both hunting and non-hunting organisations has been my main priority. Recognising that we share values, we have to stand for them together,” said George Aman, looking back.

During his inaugural speech, Philipp Harmer drew attention to some of the many highlights and successes that George Aman achieved during his Presidency, including:

Upon his election as the new CIC President, Philipp Harmer introduced his vision for the CIC going forward:

“We shall work on the general understanding that HUNTING renders a valuable SERVICE to NATURE and SOCIETY.”

The program of his Presidency will focus on four key elements:

Philipp Harmer enjoys the support of CIC members from around the world. He is a dedicated hunter and wildlife conservationist, with practical experience globally. He is in the chocolate industry and manages activities in tourism, real estate, agriculture and forestry in Austria, Czech Republic and Hungary.

A copy of the Curriculum Vitae of LL.M. Dr. Philipp Harmer can be found here.