President and CEO, Conservation Visions. President, Policy and Law Division of the CIC

Deputy Director, Ministry of Environment, Tourism and Forestry of Namibia 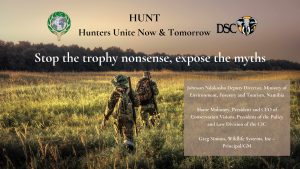 The term “trophy hunting” is misleading and fails to represent many of the intricacies, realities, and scientific foundations associated with well-managed, sustainable hunting.

The aim of this session was to present the challenges, including the hostile political campaigns, that international hunting faces today, but also what the hunting community could do differently, internally, to alter the narratives.

Mr. Mahoney opened with a discussion on the context of hunting: understanding social dialogue and the role of policy in a world where the empathy for animal species is on the rise. “I believe this empathy has always been there—since the earliest humans existed—but now many people are separate from where their food comes from.” With this, the starting point for discussions was set, namely how best to position sustainable use in the modern world. On this note, it was asked: “How can we think of trophy hunting in a different way? And, is there a term that works better?”

Greg Simons opened by reminding the audience that “regionally, nationally, and internationally, cultural and social acceptances of hunting vary. Global conservation strategies must be adaptable and approached with a critical mindset for different areas.”

From the Namibian perspective, “hunting is important because it is a key part of our model. People need incentives that encourage them to live with the animals that hurt their livestock or even take human lives from the community,” explained Johnson. Hunting is such a critical part of their model that it cannot be easily replaced unless they create a new model. However, “trophy hunting” is a controversial term in Namibia, just as it is in North America. “In Namibia, we use ‘conservation hunting.’ It is still hunting, but with conservation in mind.” Mr. Ndokosho went on to share the successes of Namibia’s new scoring system that relies on age-related scores instead of size.

Greg Simons shared a story about a time when he encountered a woman from an animal rights group in the lead up to a testimony that he was about to give at the Texas Capitol. She reminded Greg of how problematic the word “trophy hunting” can be to the hunting community. Despite the problematic nature of the term, it is not easy to choose an alternative because hunters will all have a different take on the reason they hunt, be it for food, for spiritual reasons, as part of their cultures and traditions, or for many other reasons. However, Greg believes that the narrative is more important than the choice of a new word or term. It needs to be something that everyone can relate to, such as food and where it comes from.

For Shane Mahoney, the words are very important. “International hunting is the term of choice for me,” he said, “It does not use objective adjectives that qualify hunting.” He and Mr. Ndokosho agreed with an audience member from Zimbabwe who suggested the need to change a specific term in the hunting lexicon, namely “record book”. The alternative term put forward was “reference book”.

To round things off, there was one quote from an audience member that resonated well with the discussions, and served as a good message for the future: “Don’t retreat, but innovate, adapt and be pro-active.”

For a detailed look at this session, the event can be watched in full on the CIC Facebook page.