Technical Session I – Visions for the Countryside 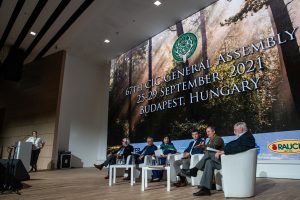 The first Technical Session of the 67th General Assembly was “Visions for the Countryside” and was moderated by Danene von Westerhuizen, President of the Namibia Professional Hunting Association (NAPHA).

The aim of this session was to explore the current state of the countryside, the rural-urban divide, as well as how we see these matters developing in the future.

In her opening speech, Danene von Westerhuizen talked about her experiences growing up in Namibia. She mentioned the safaris there that are so loved, which is contrasted by the realities of the rural inhabitants often working behind the scenes.

After this, the session moved onto a panel discussion format. The panellists in attendance were:

The session started with the panellists discussing how the countryside looks in their respective countries and regions. Franz Fischler outlined the state of the countryside in Europe and how, due to the limited spaces available in European countries, industries such as hunting, agriculture and forestry often share spaces and resources. In this context, the importance of fostering relationships and dialogue was emphasised, despite how difficult it may be. It was suggested that large scale issues, such as climate change, may be a force that can bring these rural stakeholders together.

Aban Kabraji, who has worked extensively in Asia, commented that values are integrated with culture, economics and traditional land use patterns. For impoverished countries, it was stated that the values associated with the countryside can be changed, such as through the use of hunting programs. Fauna that was previously seen as food can instead be turned into more beneficial, which has the added impact of incentivising communities to conserve rural spaces.

When discussing the current work that takes place in preserving the interests of the countryside, Thierry de L’Escaille noted how rural livelihoods are largely supported by private actors. It was suggested that we should reject the outdated philosophy of introducing burdensome regulations to fix rural issues, which would allow these actors to carry out their duties effectively. Recognising the work of private actors, such as through the ELO Wildlife Estates label, was put forward as another measure to support such organisations.

Giving the perspective of the rural stakeholders was Alain Durand, who discussed the need to define the term rurality. While people often think of hunters when they hear the term, he stressed that there are many other rural stakeholders in the countryside; fisherfolk, farmers, entrepreneurs, health care providers and more. He described the common feeling of not being understood by outsiders amongst the stakeholders, and their desire to jointly protect rural values and heritage.

With a view to the future, Scot Mcclure and Sean McLelland talked extensively about the work of their organisation, Outdoors Tomorrow Foundation, and how it helps bridge the rural-urban divide through education. The Outdoors Tomorrow Foundation looks to educate children on wildlife conservation through a gym class, introducing them to fishing, archery, orienteering, and hunting through practical means and games. Through their work, which teaches wildlife conservation to a degree far beyond the US school curriculum, they found that the youth did become engaged in wildlife issues when taught in this manner.