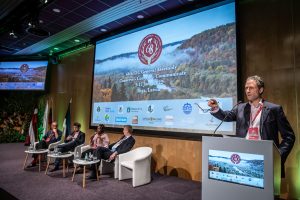 In today’s world, effectively communicating one’s messages is synonymous with organisational success. This, however, brings into question how best to use modern communications tools, and their effectiveness in certain use cases.

This session was organised to explore this exact theme, with speakers invited to discuss their experiences with certain tools, and their use in communications campaigns.

Moderating the session was Rob Yorke, Environmental dialogue broker and Rural commentator, who made reference to people attributing the decline of biodiversity to hunting despite this being far from the truth. With this in mind, a question was posed to panellists: How can hunting reach people with a new context that puts a focus on conservation?

One theme that arose during the discussions was the type of storytelling that should be highlighted when communicating hunting activities.

Augustin Leclerc (Director General of Corporate & Partner at JIN) suggested that shifting the focus away from the killing of animals, and instead to conservation and wildlife management, is the key to portraying hunting in a positive light. Specifically, hunters were encouraged to tell the wider audience some hunting success stories – the collective action of French hunters who prevented African Swine Fever from reaching Belgium was given as one possible example.

Expanding on this point by providing the perspective needed when also sharing the collective thoughts of local communities in tandem with sustainable use was Bupe Banda (Community Leaders Network, Zambia). It was stated that telling the true story of local communities is far more crucial than telling an attractive one. When looking to make effective policies, going to meet people in person was emphasised as essential for people that are interested in voicing the needs of local communities.

Engagement with the media was another common thread that appeared during the session. Tristan Breijer (Senior Vice President of Hunter & Co. App.) spoke about the need to be proactive and clearly define what it is that they are defending. It was argued that the main problem when trying to reach people is the lack of communication from hunters due to the fear of backlash. This was ultimately attributed to the media and the complex nature of conservation through sustainable use.

Providing a contrasting perspective was Marc de Beaufort (CEO of Idafield), who challenged the idea that the media is to blame for the negative portrayal of hunters. He emphasised that while it is true that the media is looking for controversial stories, it is up to the hunting community to push the true message of hunting by actively engaging with media outlets.

If you are interested in more details, this session can be viewed in full on the CIC YouTube Channel. A video of the whole day’s proceedings is available here – Technical Session I takes place between 4:19:50 – 5:11:00.