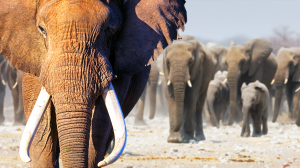 Representatives of the Government of Botswana and the Community Leaders Network are currently in Germany seeking direct talks with politicians and the media.

The CIC welcomes the initiative from Africa to explore avenues with Germany in implementing the 2030 Global Biodiversity Framework.

Together with the Ambassador of Botswana, the Deputy Permanent Secretary of Botswana‘s Ministry of Environment, Wildlife and Tourism is travelling through Germany.

They are accompanied by the chairman of the Community Leaders Network (CLN), an association of local people from nine states in southern Africa. The aim of the trip is to raise awareness about the negative consequences that an import ban on hunting trophies would have for the people in their countries.

The CIC emphasises the value that hunting revenues bring to local populations and wildlife conservation in Africa, as well as Asia and North and South America.

Photo tourism and hunting complement each other

Botswana lifted a five-year hunting ban in 2019. Rampant human-wildlife conflict, especially from elephants, and job losses for those not dependent on photo tourism led to the government’s decision according to a local survey.

On the occasion of the visit, Botswana’s ambassador to Germany, Mmasekgoa Masire-Mwamba, spoke about the complementary nature of hunting and photo tourism:

“Photo tourism and hunting are of essential importance for our country and complement each other. Hunting guests provide income to regions of Botswana that cannot benefit from photo tourism due to lack of infrastructure or lack of photo subjects, such as landscape or wildlife. This is done in a strictly regulated way, just like in Germany.”

Hunting is significant source of income for local people

Dr. Kabelo Senyatso, Deputy Permanent Secretary and former Director Wildlife and National Parks in Botswana, on the importance of hunting revenues for his country:

“The money goes directly into our Conservation Trust Fund. This funds community-based projects that improve the livelihoods of our people and their willingness to co-exist with wildlife. The money is an important source of revenue – contrary to claims by the anti-hunting lobby, which has never invested money in conservation projects in Botswana.”

People at the heart of species conservation

Dr. Rodgers Lubilo, chairman of the CLN and representative of millions of rural Africans, is using his trip to Germany to promote the inclusion of local people in decisions made by German and European policymakers:

“Our people are crucial in species conservation. We would like to invite our friends from around the world who have not yet had the opportunity to work with our communities to join us. Wildlife populations are growing in southern Africa because our governments put people at the center of all species conservation efforts.”

Get in touch with the African delegation! Contact Stephan Wunderlich (CIC) at: +491702487514, s.wunderlich@cic-wildlife.org