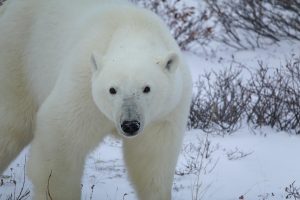 Animal rights organisations around the world are demanding an end to polar bear hunting, a demand which violates the rights of the indigenous Inuit people under international law.

In view of the upcoming CITES CoP 19 in Panama, many organisations and individuals are calling for a halt to the practice of polar bear hunting, often citing animal welfare concerns as the justification.

Calling for blanket bans of such practices can be harmful for wildlife populations and human livelihoods, particularly in areas where regulated and sustainable hunting programs are being successfully carried out.

Scientists working in this topic area have criticised calls to end polar bear hunting due to its importance to indigenous peoples and practices.

Dr. Victoria Qutuuq Buschman (University of Alaska) spoke on the issue in a letter to the CIC:

“I believe the attempt to ban the polar bear hunt is misguided. Any ban that makes it difficult for indigenous peoples to practice their way of life violates the UN Declaration on the Rights of Indigenous Peoples.

Polar bear hunting is highly regulated and mainly takes place in sub-populations that are either stable or growing. Conservation measures should be based on sound science and indigenous knowledge, but not on a perceived moral superiority.”

The World Wildlife Fund (WWF) has also supported the view that polar pears are not threatened by indigenous hunting practices, while reiterating their right to hunt polar bears under international law.

A similar campaign to end the hunting of seals was hosted by the environmental organisation GREENPEACE in the 1980s, which ultimately led to income losses threatening the existence of the Inuit people. GREENPEACE eventually issued a public apology on the matter.

Providing an indigenous perspective on polar bear hunting was H.E. David Akeeagok, the Minister of Environment of Nunavut, a Canadian territory which has a population that is mostly Inuit. In a statement, he reaffirms the significance of hunting for Nunavut, and their commitment to integrating it into their wildlife management plans:

“Hunting provides sustenance to our communities and passes on traditions. Our government is committed to the long-term management and conservation of wildlife within Nunavut. We must ensure proper measures are taken so future generations can pass on their ancestral knowledge and skills.”

It is not surprising that government representatives are supportive of these practices when considering the scale of socio-economic benefits associated with polar bear hunting.

According to an IUCN paper, all meat from polar bear hunts in Nunavut – whether they are conducted by local or foreign hunters – goes directly to local communities, providing a vital source of protein in a region where it is relatively scarce.

The report goes on to state that restrictions to polar bear hunts (i.e. trophy import bans to the United States) have already had a negative impact in terms of income to local residents, with estimated annual losses of $840,000 for Nunavut communities.

With this in mind, it is essential that we continue to support the rights of indigenous peoples and local communities to utilise wildlife species when it can be carried out sustainably.