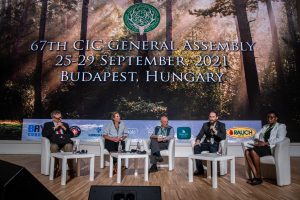 Thematic Session IV of the 67th General Assembly was entitled “Living with large carnivores and other dangerous game.”

The session was moderated by Michel Mantheakis, Professional hunter and CIC Ambassador (Tanzania), who opened by talking about one of the primary dangers associated with the countryside; large carnivores.

The panellists in attendance at the session were:

Coordinator of a LIFE project on Large Carnivores, WWF Hungary

The session looked at differences in perceptions around large carnivores and other animals that are considered dangerous, whether to human lives, health or livelihoods. The panel looked at differences in the reporting of conflicts and damages, including how some lives seemingly matter more, or are reported on more widely, than others. The initial question that panellist grappled with was how to balance the needs of people and wildlife.

In her answers, Danene von Westerhuizen emphasised that the needs and wishes of local communities need to be understood and acted on. This is why the Namibian Constitution recognises the rights and development needs of local communities, in addition to the need to conserve biodiversity.

As became evident during questions from the floor, living in true harmony or co-existing fully with wildlife is impossible. Nevertheless, we need to minimise human-wildlife conflict and find a balance that is sustainable. While wildlife remained the main focus of discussions, feral dogs and cats were highlighted by Ramón Pérez- Gil Salcido as a source of human-wildlife in Mexico. They were also seen as a source of human-human conflict, as evidenced by the public outcry when an experimental hunting season was briefly introduced for feral dogs in one region.

Dr. László Patkó stressed that there is a big difference between what is truly “dangerous” to humans, and what is merely “frightening” or “scary”. Despite this, panellists agreed that the biggest threat that wildlife poses is to livelihoods in rural areas.

Ultimately, local people need to see value, and be able to benefit from wildlife. Patricia Wangui highlighted the example of her home county, in Kenya, where wildlife numbers are growing. This is one of only two counties with positive trends in wildlife numbers, out of a total of 47 counties. The main reason: private conservancies and ranches. These structures have delivered benefits to communities, including through development activities.

While compensation was also put forward as one tool for mitigating conflict, it was not seen as the ultimate solution, and is open to abuse. Importantly, one cannot simply compensate for human life. Instead, many panellists agreed that wildlife has to pay for itself; and unless you can get rural people to support and buy-in to wildlife conservation, you cannot win the struggle. It was emphasised that to-date there is nothing that incentivises this as much as the hunting of a few animals for a fee. People are willing to live with wildlife, purely because of this simple incentive which is ecologically and socio-economically sustainable, given the right framework.

Building on the discussions, the question of how best to engage local communities emerged. It was agreed by all that ultimately they are the ones who will decide on management actions. Community power represents a strong power. Together, communities can act to prevent and limit damages.