On 6 January, 2022 the CIC and Dallas Safari Club (DSC) jointly hosted the HUNT conference in Dallas (USA) within the framework of the 2022 DSC Convention.

HUNT, or Hunters Unite Now & Tomorrow, was organised to explore some of the most pressing issues in the world of hunting and sustainable use. The topics that were addressed in the sessions were:

Invited to each of the sessions were a number of experts and opinion leaders working in the relevant topic areas.

CIC President, Philipp Harmer linked all these elements together in a speech he gave at the CIC-USA Members Breakfast Meeting the following day. There, he emphasised his core vision for the CIC going forward: to highlight the services that hunting renders to society.

Enhancing biodiversity, managing wildlife, providing healthy nutrition and offering recreational opportunities were listed as the core essential services that should be focused on.

The topic areas explored at the conference would play a key role when looking to execute this vision. Effectively communicating hunting successes and truths, creating alliances to strengthen rural forces for the benefit of wildlife, and raising credibility – in the eyes of states and governing bodies – by successfully conducting wildlife management activities, were listed as some of the priority areas when looking to highlight the services rendered by hunting.

A summary of the session on rurality can be seen below. Separate articles are also available for the sessions on “trophy hunting” and communication.

From local to global – Putting aside our differences, building alliances 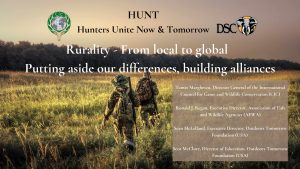 This session was organised to identify the issues associated with the rural-urban divide, as well as to explore the role that hunters can play in highlighting the significance of rural places, actors and activities.

Tamás Marghescu opened with a recap on the successes of the One with Nature World of Hunting and Nature Exhibition in Budapest, Hungary. In his opening presentation, Tamás Marghescu also outlined some of the key messages on this topic from the 67th CIC General Assembly (GA) which took place in the framework of the World Exhibition.

The CIC GA included seven session topics linked to rurality, namely: Vision of the Countryside; Zoonotic Diseases to our Health Approach; Feeding the World at the Expense of Small Game; Living with Large Carnivores & Other Dangerous Game; Culture of the Countryside; Alliances, the Way to Gain Political Strength; Hunt for Likes – Forward Media Strategies in Focus.

The wellbeing of the countryside and rural spaces was mentioned as being critical to conservation efforts and the protection of cultural heritage. At the same time, it was highlighted that many rural stakeholders feel misunderstood. Conflicts between those working on rural issues is also commonplace, when in fact the priority should be to come together and to involve urban dwellers in the conversation.

Considering this, alliances were stressed as being vital to the future of the countryside. It was suggested that speaking with one united voice, despite differences in opinions on some topics, will be the only way to safeguard rural wildlife, habitats, livelihoods and cultures.

Having set the scene with his presentation, Tamás Marghescu opened the first of the panel discussions with a question for all panellists on the need to bridge the gap with the urban and suburban segments of society i.e., the majority. All panellists agreed that there is still a large urban-rural gap that needs to be addressed.

“There has been a shift from the utilitarian view of nature where wildlife is used for human benefit to a more mutualistic view that we all must mutually benefit,” explained Ron Regan.

“We need to teach youth why the rural lifestyle is important—they have no concept of what sustainable use is. Many of us had a family member or friend who shared the importance of hunting. Outdoor Adventures replaces the first mentor by teaching these things in schools,” said Scot McClure. Scot McClure and Sean McLelland’s organization, the Outdoors Tomorrow Foundation brings outdoor education into schools across the U.S.

To get around the difficulties of parents or teachers not wanting to include hunting in the curriculum because of their own personal views and values, Scot explained how Outdoor Adventures uses the State-wide-accepted standards to enter the curriculum through physical education—not biology—and they provide complete materials that a teacher can bring to the class and pick and choose units that fit their purpose. The biggest obstacles they face when trying to get their curriculum into schools include trying to find the right decision makers who understand their goals, and the proper funding to reach all school districts. Once these obstacles are overcome, they also have to find the right teacher.

Mr. Regan also described how he often thinks about the Washington D.C. community where he currently lives. It is quite diverse, but he often wonders how many people would know where to go to, or even how to get to places for outdoor recreation outside the city. The outdoor community needs to think about how to reach these groups that never learned about the rural opportunities outside their cities. Organizations and representatives working in forestry, farming or ranching are all making efforts in this regard in the U.S. Capitol. These organizations are representing the outdoor industry in the legislative world.

Scot McClure also stressed that organizations are critical for the future of hunting. “Organizations like DSC, SCI, Ducks Unlimited with their local chapters give students and their families a place to go after students learn material in school. It gives them a place to connect with a like-minded group as a next step when they finish the class.”

For a detailed look at this session, the event can be watched in full on the CIC Facebook page.