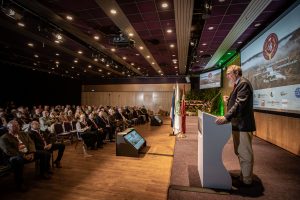 The 68th General Assembly of the CIC kicked off today in the historic city of Riga, Latvia.

Held under the theme of Communications, and the motto “Conserve – Convene – Communicate,” the conference will look to explore the importance of communications in today’s world and answer questions such as:

How do we communicate our successes? What types of messaging are most effective? And what can we learn from our allies and from those across the table?

To open the conference, the Central Military Band of the Latvian National Armed Forces played the CIC Hymn and a medley of the Latvian, Lithuanian and Estonian national anthems during the official CIC Flag Ceremony.

The master of ceremony and CIC Director General, Tamás Marghescu, then extended his thanks to the Governments of Latvia, Lithuania and Estonia, their national hunting associations, and all that facilitated the organisation of the General Assembly in Riga.

CIC President, Dr. Philipp Harmer, then set the scene by welcoming participants to the event, which comes two years after the original conference was planned for 2020. Referencing the theme, he emphasised that it is the duty of hunters to communicate with the public and to inform them of the services they provide to nature and society. The need for hunters to adapt to modern times – dealing with all forms of communications while adjusting their value – was stressed as a necessity going forward.

Taking the stage following this was H.E. Kaspars Gerhards, the Minister of Agriculture of Latvia. In his speech, he spoke about the conference motto, stating that effective communication is the key to success in both politics and legislation. The obvious changes to nature that we have seen in recent years was mentioned in parallel with the less visible, but equally impactful, changes we have seen in the digital environment, with all stakeholders now having a responsibility to communicate the role that hunting and sustainable use plays in managing wildlife resources.

Exploring the intersection between conservation and politics was Dr. Zoltán Kovács, Hungarian State Secretary for International Communication and Relations. “If you want things to remain the same, then things cannot remain the same” – this was the sentence put forward to sum up the current state of affairs for the sustainable use community. While it was discussed that we do indeed need to consider the importance of communications if we do not want to fall behind, a supplementary motto of “Awake – Adopt – Communicate” was suggested if we truly want things to remain the same. This was the approach recently used in Hungary, culminating in the “One with Nature” exhibition in Budapest last year, in which a renewed approach to conservation was adopted by the Hungarian Government.

As part of his closing remarks, he stated the CIC and like-minded organisations will lead the way in creating a renewed approach to conservation and communications, while emphasising the Hungarian Government’s intention to assist and share knowledge on how to carry out such activities.

The Opening Ceremony introduced themes and ideas that were explored further during the Technical Sessions that took place during the rest of the conference.

Summaries of the Technical Sessions will be coming shortly, so make sure to watch this space for more updates.