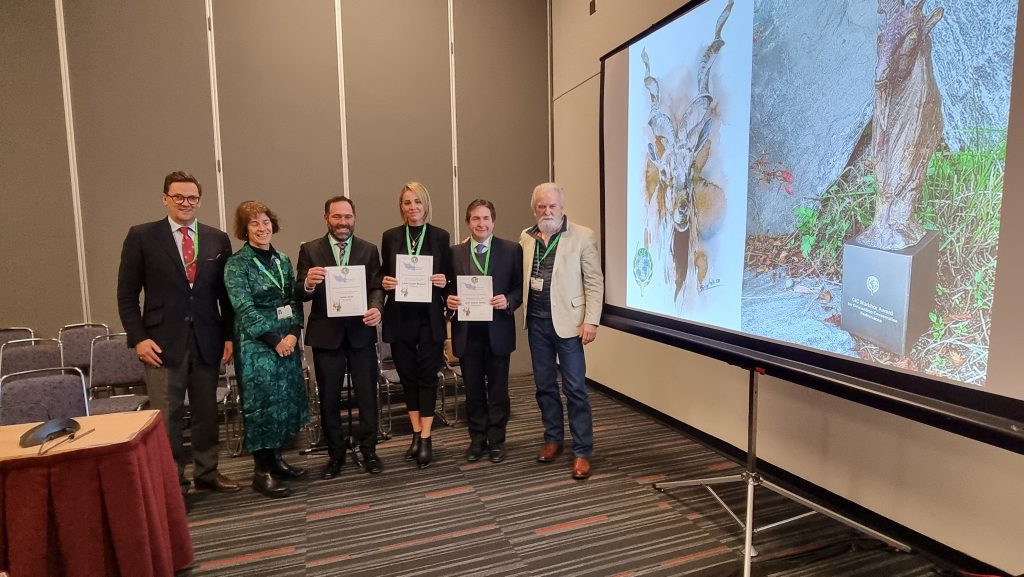 The CIC is delighted to announce that the 2022 CIC Markhor Award has been presented to a project on Repatriating Desert Bighorn Sheep, which saw free-range desert bighorn sheep numbers grow from 0 to 1,500 across three Mexican states.

The Markhor Award is hosted at every CBD COP and is awarded to projects that link the conservation of biodiversity and human livelihoods through sustainable use. At this year’s CBD COP15 in Montreal, Canada the award was presented to the winners by Dr. Dilys Roe (Chair of the IUCN Sustainable Use and Livelihoods Specialist Group), who was on stage at the ceremony alongside Arno Wimpffen (CIC Deputy Director General), and Shane Mahoney (Head of the CIC Policy and Law Division).

After a thorough evaluation of all nominees, the project in Mexico stood out to the CIC jury for its innovative use of nursery herds to repatriate desert bighorn sheep. This is a practice that is already conducted in North America, which was applied and adapted to the host country to restore one of their historic species.

The use of nursery herds involves trapping and translocating desert bighorn sheep from areas where they are well populated to new areas with little – or in this case no – individuals of the species. Through this method, a starting population of 353 desert sheep grew to 1,500 in the space of a few years in three ranches located around Mexico.

Nominated by the Wild Sheep Foundation (WSF), the award goes to the following individuals for leading the project in their respective states:

The award winners are all members and leaders of WSF’s Mexico Counsel, which was established in 2017/18 to promote cooperation amongst landowners and outfitters. The aim of the Counsel was to promote the enhancement, conservation, and repatriation of desert bighorn sheep using market forces and sustainable use (including hunting) as a guiding principle.

The sustainable utilisation of a few select individuals – once a healthy population has been established – incentivises a broader adoption of this model, as it allows these types of operations to be self-sustaining given the high start-up cost that is required.

Previous winners of the award were also in attendance to give an update on the status of their projects.

Timoteus Mufeti (Environmental Commissioner, Ministry of Environment and Tourism, Namibia) took the stage to discuss Namibia’s Communal Conservancy program, which won the Markhor Award in 2012. The winning project from 2014, the Tajikistan Mountain Ungulate Project, was presented to attendees by Dilovarsho Dustzoda (Head of Department for International Relations and Conventions, Committee for Environmental Protection, Government of Tajikistan).

By highlighting successful projects from around the world, the CIC looks to bring attention to conservation best practices while highlighting sustainable use as the second objective of the CBD. With the post 2020 global biodiversity framework due to be adopted at COP15, this year’s ceremony is particularly timely, as many of the 2030 Action Targets are in parallel with the goals of the Markhor Award.

The CIC congratulates the award winners for their wonderful achievement, and welcomes others to follow their example in implementing and adapting conservation best practices to new regions around the world.