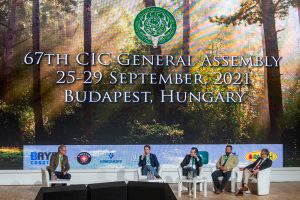 “Feeding the World at the expense of Small Game” was the title of Technical Session III of the 67th General Assembly.

The session, which was moderated by Klaus Hackländer (CIC Applied Science Division President and President of the Deutsche Wildtierstiftung), sought to understand what hunters can do to stop the decline of small game considering the intensification of agriculture we are seeing around the world.

The panellists in attendance for this session were:

The panellists opened by discussing the state of small game in their respective countries. Michel Mantheakis highlighted the differences between his country (Tanzania) and Europe, namely the level of poverty and the increasing population. It was stated that these two factors contribute to the decimation of small game, which is partly attributed to the utilisation of small game as a source of nutrition.

Giving a contrasting view was Nate Watson, who outlined the incentivisation schemes used in the US for small game conservation. Agricultural producers, farmers and ranchers are incentivised to maintain small game habitats through initiatives such as the CRP program and the Farm Bill; these initiatives also allow these stakeholders to profit from opening these areas to hunters.

Focusing more on the incentivisation schemes for the agriculture sector was Péter Pál Hajas, who gave an insight into the agri-environmental schemes that he makes use of on his farm in Hungary. In return for splitting his farm into smaller fields, diversifying his crops and introducing new field margins, he was able to generate income through agri-environmental schemes. While it was stated that this type of farming is less profitable than simply using large fields, it was argued that this type of farming is more beneficial for rural tourism, particularly the gastronomy sector. It was also suggested that consumers may see his products as higher value in the future, which would make this type of agricultural production more profitable.

In places where agri-environmental schemes are not available, Francis Bruner suggested that alliances will be necessary to get the necessary legislation in place. The UK was given as an example where this was successfully implemented. A group of stakeholders collected data needed by the government over a period of 20 years; the UK now has one of the best agri-environmental schemes in Europe.

Domestic and feral cats were also brought up as a topic of discussion, particularly the difficulties in addressing cat issues due to their perception amongst the general public. Francis Bruner suggested that alliances with adversaries will be required before looking to address any issues that may appear. As many stakeholders are unlikely to be willing to work with hunting organisations, this means an alliance with such organisations will be first required to build trust. Building on this, Péter Pál Hajas added that examples of best practice from neutral sources can be used to sway those with differing opinions

To close the session, Klaus Hackländer spoke about the need for hunters to get involved in small game conservation. He emphasised how the loss of small game would impact the ability to showcase the benefits of hunting (e.g. habitat improvement and predator control). Additionally, the cultural elements associated with small game, such as certain dog breeds and falconry, were stated as further things that would be impacted by the loss of small game.