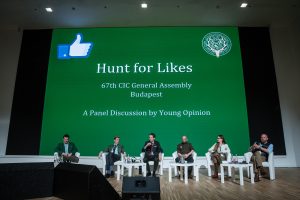 The seventh and final Technical Session of the General Assembly, Hunt for Likes – Forward Media Strategies in Focus, was hosted by the Young Opinion Working Group of the CIC. The session was moderated by David Plaz, member of the CIC.

The panel brought together experts of different backgrounds representing different organisations. The panellists in attendance were:

International Coordinator for the CIC and Deutsche Jagdverband (DJV)

Hunter&Co Manager and CIC YO Member

The session focused on the role that social and general media play in how society perceives hunting. David Plaz opened the session by noting that hunters make up only a tiny fraction of the world’s population, which in turn means that hunting laws are largely made by a non-hunting majority. He noted that hunters have a devastating image problem and are not using social media effectively and wisely.

Dr. Lucas von Bothmer talked about the challenges in communicating hunting as a positive activity, as the image of a hunter who kills to protect wildlife is a difficult message to show in a positive light. Instead, hunters should communicate hunting as a part of local agriculture, and emphasise the non-profit services that hunters provide.

Tatjana Orosava highlighted the importance of bringing women to the hunting industry who can show another perspective of the activity. At the same time, she mentioned the growing need to show that hunting is not just killing and that there is culture, ethics and experiences behind it as well.

In his discussion Jens Ulrik Hogh stated that old hunting organisations have not adapted to the new media landscape. He brought out two important problems regarding the hunting community. First being that organisations are not responding quickly enough to stay in the debate around hunting. Second problem being that a lot of the old organisations have the wrong mindset; that all responses have to be fact based. He stressed that in order for the media to run the stories, it has to be interesting for their audience.

Stephan Wunderlich noted that the hunters as well as the organisations, need to focus on delivering the local voices. The negative effects that local people will bear because of banning trophy imports must be well shown. He further noted that as organisations in Europe, they can change the narrative by giving local communities platforms where they can tell their stories.

Tristan Breijer regarded data as the most important tool to use for arguing for the benefits of hunting, however it was stated that it is necessary to frame data and facts as part of a story to get people to listen. In addition, he encouraged hunters to talk to local media about hunting and the motivations behind it.

Building on the discussion, the moderator asked for take home messages from the panellists. Stephan Wunderlich once again highlighted the importance of bringing people who are most affected by hunting practices together with the decision makers and holding a dialogue explaining their attitudes to them. Tatjana Orosava reminded the audience that there is always two sides to the story, and that the most important thing is to listen to all the opinions and find a compromise. In agreement, Jens Ulrik Hogh noted that the most common problem in Europe is the continuous disagreement between hunters. He further stressed the need for education on how the media should be handled by individual hunters as well as by organisations. Tristan Breijer mentioned that hunters should shift the focus to inviting non-hunters into the conversation as well. He stressed that communicating the benefits of game meat is also a crucial part of making hunting more acceptable by the public. Dr. Lucas von Bothmer closed the discussion by reminding everyone that the services that hunters are providing are free and stressed the need to connect hunting rights with property rights.

The panel came to a mutual agreement that it is crucial to educate hunters and organisations on how to use social and general media in a way that presents a positive image of hunting and promotes it to the non-hunting public.