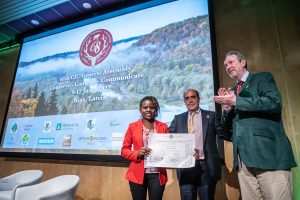 The award was accepted by Bupe Banda (Community Leaders Network Zambia) – who participated in the conference as a speaker – on behalf of Resource Africa.

The video was selected by the prize committee for helping to shine a light on the realities faced by local communities across southern Africa.

The open letter was addressed to celebrities in the UK, with the signatories urging them to stop undermining their conservation efforts and their right to sustainably use natural resources.

Particular topics that were addressed in the video included incentive-based conservation, habitat and population restoration, as well issues related to human-wildlife conflict.

The CIC extends it congratulations to Resource Africa, and welcomes others to follow their example by giving a voice to indigenous peoples and local communities in all areas of the globe.